The articles have been published by Italian media outlets such as “La Verita”, “L’Antidiplomatio”, “Sardegnagol”, “CIVG”, “Giornale Diplomatico”.

In his articles, the ambassador has responded to articles, which contain distorted and biased information on the so-called "elections" in the occupied territories of Azerbaijan, the Armenia-Azerbaijan Nagorno-Karabakh conflict, earlier published by some of these media outlets.

In his articles, the Italian journalist drew attention to the illegality of the so-called "elections" held in the occupied territories of Azerbaijan, noting that these "elections" were severely criticized by the international community.

In the articles, the journalist also stressed the fact about the grave consequences of Armenia's aggression against Azerbaijan, as well as the difficult situation arose due to the coronavirus epidemic, which requires Armenia, which is drowning in economic difficulties, to change its position on the conflict and respect the documents of international organizations. 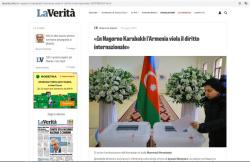