The tour organized by Azerbaijan Ministry of Culture and Tourism took place from 1 to 9 August, Trend Life reported.

A 60-man delegation of Azerbaijani musicians thrilled the audience with magnificent performance.

Addressing the event, festival's director Cornelia von Kerssenbrok spoke about the the festival and its importance. She expressed her gratitude to the Azerbaijan Symphonic Orchestra which, has been participating  in the festival for nine years.

In her speech, festival's director stressed that she has already been in Baku. She was a member of the jury at International Competition of Vocalists named BulBul.

Fifteen-year-old  Azerbaijani conductor thrilled with his virtuosity and passionate devotion to music.

Under his guidance, the programme continued with beautiful music pieces from  the ballet "Love and Death" by Polad Bulbuloglu.

In connection with the 20th anniversary of the festival,  performed  the song "Happy birthday" arranged by various composers. 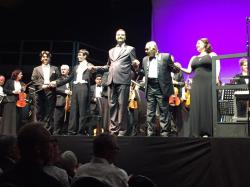