Azerbaijan and Lithuania increased the mutual trade turnover in 2020 and in the first quarter of 2021, despite COVID-19, Economy Minister Mikayil Jabbarov has said.

Stressing that political and economic relations between the two countries are developing and the legal framework for expanding cooperation is being improved, Jabbarov noted that Azerbaijan and Lithuania also cooperate within the framework of the Eastern Partnership program. Intergovernmental Commission between Azerbaijan and Lithuania promotes the deepening of economic and trade relations and supports the implementation of projects in various fields through this platform.

The parties discussed possibilities for expanding trade and economic partnership.

Gabrielius Landsbergis visited Azerbaijan on April 30 were he was received by President Ilham Aliyev and Foreign Minister Ceyhun Bayramov.

Addressing the joint presser with Landsbergis on April 30, Bayramov said that Azerbaijan and Lithuania have so far signed 39 documents and 12 more are under consideration. It was noted that Azerbaijan is Lithuania's biggest trade partner in the Caucasus. 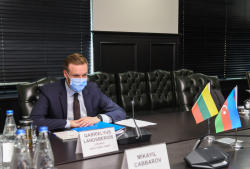