He made the remarks at a news conference at Azerbaijan State University of Economics (UNEC) in Baku on December 6.

Azerbaijan's victory in the Karabakh region is the most significant victory of the Turkic world after the war for Turkey's independence, Sancar said.

"Shusha is considered the center of the culture of the Turkic world in terms of history. I promised that after the liberation of Shusha city I would go there and pray in the mosque. Fortunately, my dream has come true," the scientist said.

Sancar arrived in Azerbaijan within the UNEC Economic Forum-2021.

The scientist noted that he has been visiting Turkish countries for the past five years, calling officials to invest heavily in science.

"Weapons or other military equipment can be bought for money. But if they fail, you will be halfway there without professional staff. At the same time, a great investment must be made in basic knowledge in order to reach a level of complete independence and self-determination," he said.

In his introductory speech, UNEC Rector Advisor Elshan Baghirzade noted that this is Aziz Sancar's second visit to Azerbaijan. He first visited the country in 2017.

Within the framework of the forum, Aziz Sancar held a number of meetings and organized a visit to Shusha.

The main goal of the scientist's visit to Azerbaijan is to get acquainted with the new environment created in Azerbaijan after the Second Karabakh War and to once again encourage the young generation in Azerbaijan to pursue science.

Speaking about Aziz Sancar's charitable activity,  Baghirzade recalled that the scientist helped a child who lost his parents as a result of the Armenian shelling of Ganja during the war. It was noted that the main direction of the scientist's philanthropic activity is to encourage the youth of the Turkic world to science and support the young generation engaged in science.

The laboratory operates under the "Food Technology" department. The laboratory will conduct scientific and practical research, studies and examinations, assess the compliance of food products with relevant standards and requirements, as well as laboratory analysis of food quality indicators.

In addition, normative and legal acts, methodical materials will be developed to improve legislation in the field of food safety. Moreover, scientific and practical reforms in food technology will be carried out.

Turkish Prof Aziz Sancar is a biochemist who has contributed to mechanistic studies of DNA repair and showed how certain protein molecules correct errors in DNA caused by exposure to ultraviolet light or mutation-inducing chemicals.

He was awarded the Nobel Prize in chemistry in 2015 along with two other scientists, Tomas Lindahl and Paul Modrich from Sweden. Sancar lives, teaches and continues his studies in biochemistry in the United States, where he moved for his doctoral studies in the early 1970s. He also contributes to the development of science education in Turkey and acts as a goodwill ambassador of Turkish culture 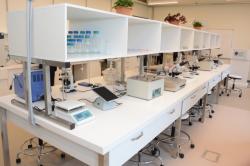