An opening ceremony of administrative building of Baku Media Center was held.

Baku Media Center is an innovative Azerbaijani company located in Baku which provides a wide range of services in the field of audio-visual production, specializing in two main fields: Video Production and Broadcast Production. In addition to having cooperated previously with the host broadcaster, International Sports Broadcasting, on the inaugural 2015 European Games in Baku, they have covered high level sporting events within Baku such as the Tour of Azerbaijan and the 30th Rhythmic Gymnastics European Championships. Baku Media Center is known to be the leading Production Company in Azerbaijan and partnered with International Sports Broadcasting to provide Host Broadcasting services for the Baku 2017 Islamic Solidarity Games.

President of Baku Media Center Arzu Aliyeva highlighted the activity of the center, as well as its successfully implemented large-scale projects.

Director of Baku Media Center, Orman Aliyev spoke of the increasing role of media and internet resources in disseminating the information and said series international level projects were implemented under the leadership of Arzu Aliyeva.

A video highlighting the activity of Baku Media Center was demonstrated at the event.

Author of “Dream” work, Honourable Academician of the Imperial Academy of Arts of Russia Rashad Mehdiyev touched upon the state support to the fields of culture and art in the country. He also stressed the works done by the Heydar Aliyev Foundation in promoting the cultural heritage across the world.

An opening of the “Dream” work was held.

They posed for photographs.

Baku Media Center is an innovative company in the media sector of Azerbaijan with experience in several international events. Along with commercial work, the company also provides services to the government agencies. 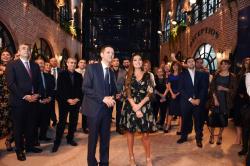