The museum invites its visitors to travel through the enchanted world of carpet weaving art.

The Carpet Museum has already provided insight into beautiful Gazakh carpet and portrait carpet ”Rabindranath Tagore” (1987) on its Facebook page.

“Gazakh carpets are famous for their high pile, relatively low density, and intense natural colors. The museum possesses a unique early-20th-century Gazakh Shikhly carpet (Inv. No. 599).​ This carpet got its name from the village of Shikhly, which is located on the banks of the Kura River, 30 km from Gazakh,” the message said.

The design of this carpet is known among weavers as Aghajli (With a Tree) or Chinar. The central field represents a garden. The medallions are separated and the space between them is ornamented with elongated elements reminiscent of cypresses, revered as a sacred tree since ancient times, as well as animal and bird motifs. The elongated elements woven in the field’s four corners symbolize garden gates − doggaz.

The oldest carpet weavers explained that this design signified paradise by simulating the gates of paradise.​ Notably, the central field appears as a sacred area and the borders act as its guardians. On the carpet's border, one can observe birds facing each other, a symbol of love and four natural elements.

Speaking about portrait carpet “Rabindranath Tagore”, it was stressed that this exquisite art work by People's Artist Kamil Aliyev is part of the museum's permanent exhibition. A portrait of Rabindranath Tagore, a famous Indian cultural figure, the first Nobel Laureate of Asia decorates the carpet's central medallion.

The carpet's design is similar to the Khantermeh composition of the Karabakh group. Buta, islimi, shahabbasi flowers, and cloud elements adorn the carpet's medallion and central field. The technical perfection, pleasing colors, and warm shades characteristic of Kamil Aliyev's works are reflected in this artwork as well. 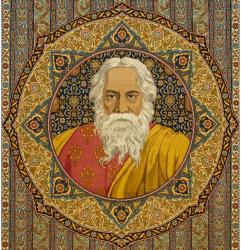