Azerbaijan has launched an online portal about the servicemen and civilians killed during the Second Karabakh war between Armenia and Azerbaijan in 2020, local media reported on September 28.

The deputy head of the department for work with NGOs and communications under the Azerbaijani president, Saadat Yusifova, made the remarks at the ceremony to present the portal.

She said that information about the war martyrs will be systematized in the “Yaddash” (Memory) book and on the Memorial.az web portal.

Yusifova underlined that various media outlets publish unsystematic information about the martyrs of the Second Karabakh War that took place between Armenia and Azerbaijan in late 2020.

"The Memorial.az web-portal was created to eliminate these unsystematic cases, apply a systematic approach to the formation of historical memory, unite detailed data about each of our heroes under a single electronic resource, and to better familiarize the public with information about them,” she stressed.

Yusifova noted that soon the functionality of the web portal will grow and it will cover information about all the martyrs and civilians killed in the conflict.

"The work of this portal will be done in close cooperation with members of the families of martyrs," she added.

The peace agreement ended the three-decade conflict between Baku and Yerevan over Azerbaijan’s Karabakh region that along with seven adjacent districts came under the occupation of the Armenian armed forces in the war in the early 1990s. 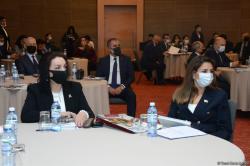