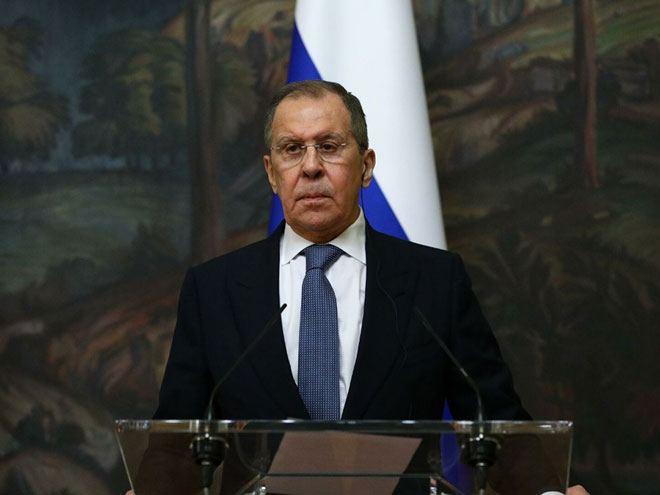 The settlement of the conflict in Nagorno-Karabakh in the Azerbaijan-Armenia-Russia format was not achieved beyond Iran's interests, Russian Foreign Minister Sergei Lavrov said, Trend reports with reference to TASS.

Lavrov delivered the speech in his interview with the Iranian State TV and Radio.

Lavrov explained that the parties to the conflict expressed interest in Russian mediation themselves.

“There is no “second” thought here,” the minister emphasized.

“Now we need to think not about who, when, did or didn’t manage to help the settlement. I would like to stress once again that the format was chosen by Azerbaijan and Armenia. This, and nothing else, determined the composition of the participants in the [trilateral] statement [on the complete cessation of hostilities in Nagorno-Karabakh]. There were no attempts to do this with the help of Iran or Turkey,” the Russia FM added.

“The success within the "Astana format" (Russia, Iran, Turkey) on the Karabakh conflict doesn’t imply the countries involved in it. Our position is as follows. When countries that have the ability to influence the situation in a particular crisis region (even if they profess different, not all overlapping approaches), decide to help the conflicting parties to end the bloodshed and unite their efforts, which serves as a good example. That’s what’s the value of the "Astana format",” he said.

The minister added that Iran's interests, in this case, weren’t ignored at all, and Moscow understands Tehran's concern about how relations between Azerbaijan and Armenia will affect Iranian transit interests, which are of particular importance in the context of US sanctions.

“It is impossible to abandon the main principle, which has been approved by all for many years: the result of the conflict should be the normalization of relations in the entire region,” Lavrov noted.