The ceremony of awarding the winners and prize-winners of finals in individual exercises and in the team competition of the 37th Rhythmic Gymnastics World Championship was held in Baku at the National Gymnastics Arena in Baku on September 19, Trend reports.

In the exercises with clubs, the first place was taken by Dina Averina (Russia), the second place - by Linoy Ashram (Israel), the third - by Vlada Nikolchenko (Ukraine).

The awards were presented by member of the FIG Executive Committee Ali Al-Hitmi, official Ambassador of the 37th Rhythmic Gymnastics World Championship Yana Batyrshina and the competition Director Natalya Bulanova.

In the team competitions, the first place went to the Russian team, the second to the Israeli team, and the third to the Belarusian team. 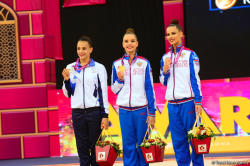